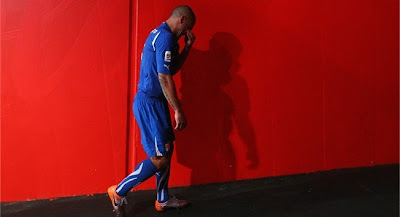 In this posting, I would like to draw attention on one of life aspect in football. Lose. Yeah lose. If you reflect for a while and remember, how many games we defeated and how many games we won, I can say that we lose more than win. Maybe you don't? Well at least that's based on my experience.

How many "serious" games I have played, maybe above 25 games, and maybe I only won 10 and played well only 7 of them. The rest, sometimes I play in a successful way, sometimes sucks. But, the difference between "success" and "sucks" is sometimes very slight. A second ago we won, this time we lose. The world turns so fast just in a matter of second. And you must be agree that in every competition, there's only 1 champion. The rest are loser. Runner up? No. People only remember the number one.

So, if we used to become a loser, should we stop fighting? Should we cry and mock? No. Lose is just a result. And between the beginning and ending, there are always process. A process of growing up, a process of being a better player. We can always get back at anytime. We can fight until we get bleed, until we get sweat and no matter the result, we should get on our feet! If we don't fight, if we stop playing maybe we won't get hurted or wounded. But we will be a wuss. We will never experience a rush blood to our head!

How many missed shot Lionel Messi tried until he got succeed? it was uncountable. How many shot attempted by Cristiano Ronaldo if compared by the goals? it sometimes 10:2. How many failure has Zlatan Ibrahimovic felt when he trained his tricks? Maybe too many to be mentioned. But are they quitter? No, they are winners. And one of important thing to bear with lose is patience. Be cool and keep trying. Life is not always how to win the battle, but how we get up from falling. Because a champion is someone who is always standing, even if standing is not easy.
Posted by Aditchenko at 9:08 PM

Email ThisBlogThis!Share to TwitterShare to FacebookShare to Pinterest
Labels: opini